I recently read a conversation on Twitter that really got me thinking about my personal coding habits and the path I’ve taken to build my skills.

I say this occasionally to normalize it:

I’ve never put code on GitHub
I’ve never done coding in my spare time for fun, side project, or portfolio
I’ve had a successful career as a developer

If you have done those things— great! Maybe I will too one day. But it isn’t necessary.

I chewed on this one for a few but ultimately agree with what Stephanie is talking about. From the comments, it’s easy to see that it had hit a nerve for some, and I think I can empathize with their reactions. There is definitely a culture of hard work that I’ve experienced in the software engineering community that often times measures an individuals’ worth by how much extracurricular activity their GitHub feed is displaying. I know I’ve been caught in this cycle as well, but I don’t think it’s healthy for the community or the industry.

And yet, that said, I do love me some off-hours coding. The computer has always held a unique fascination for me, and I love spending much of my free time exploring computing topics and creating little projects that most likely will not change the world, or even make it to a version 1.0. It’s the reason why tweets like this one totally get me fired up, I revel in the pure passion of using the computer as a tool for enjoyment:

This is kind of a casual drop by kind of video but when the 81 year old genius abstract painter Palestinian refugee shows the Amiga 1000 program she wrote where pixels are wiped away and refers to that effect as an “exodus” it exploded my entire brain https://t.co/njCYVHCnfG

First of all, wow. I mean WOW! Samia is like my new hero. I have been programming for fun and for profit for the majority of my life and Samia has completely shattered my world, in a good way.

These posts really got me excited in different ways. In the case of Stephanie’s, I really reflected on what I love about programming and the joy it brings me. And in the case of Paul’s post about Samia, it was the thrill of seeing a lifelong learner and artist with such zeal (it also doesn’t hurt that I am a sucker for Amigas). So, I went back through my notebook of hairbrained ideas and found a page from several years ago that stuck out as something I could do for a nice day project: 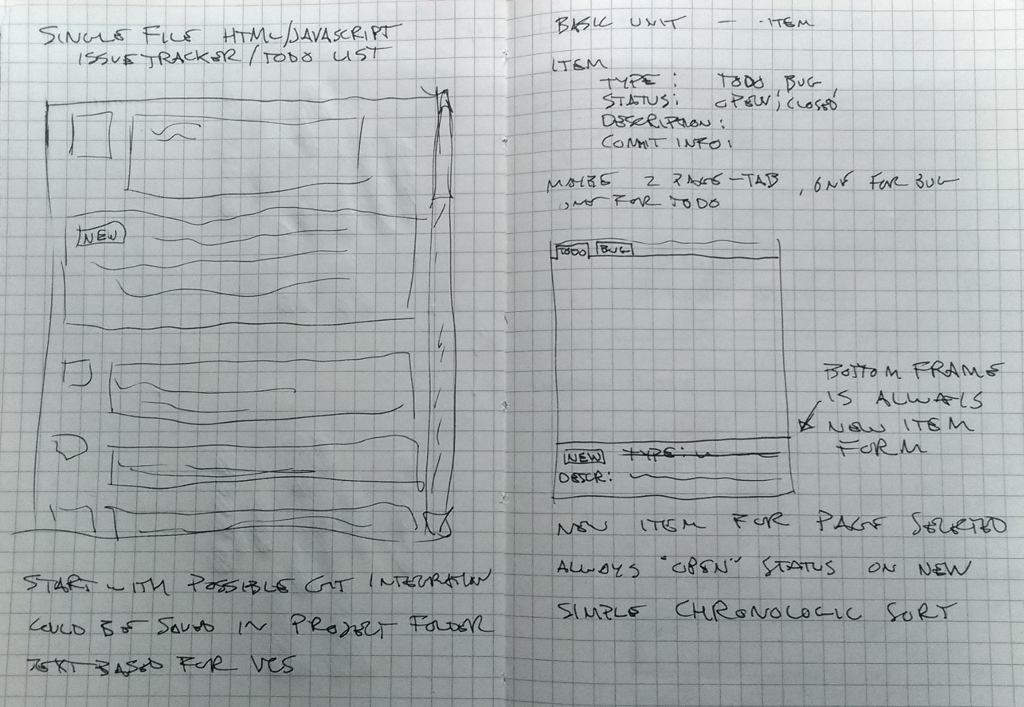 In case that is difficult to read, it says across the top “single file html/javascript issue tracker/todo list”. I’m not sure what I was thinking when I wrote this down but I appear to have spec’d out some sort of thing that I thought would help me out. I know there are a number of great solutions in this space already, but often times I like to pick a problem to work on that just sounds fun to me. Apprently “to do” lists and issue trackers are fun.

When looking at this idea though, it all came together for me. I’ve been working to learn the Vue.js framework for awhile now and I also like the simplicity of the Patternfly UI framework. Together, these two pieces of tech would, hopefully, make for a fun and quick project.

Something that I like about both Vue and Patternfly is that they can be easily embedded in a web page and do not require a preprocessing build phase before deployment. I had not tried this with Vue before and it seemed like a good challenge, I especially like the fact that even though Vue is a reactive framework it can be used straight from the HTML by including their JavaScript module. My single page application, which I was now referring to as “Chicken Scratch”, would be a perfect playground for this exploration.

With the basics of Vue and Patternfly in place, my page looked like this:

I thought it was really cool how Vue, Patternfly, Bootstrap and JQuery are all able to be served from content distribution networks, making the deployment of this “application” all self-contained within a single page. No need for a server to deploy and serve this page, it can simply be loaded into a browser through the open file dialog.

At this point my application was mainly just a hello world type skeleton, but after a few hours of tweaking and wrestling with the HTML, I ended up with something much more usable:

Sweet! I was well on my way to having a nice simple list application, all in a single page that could be used from a file. I had added the bits for crud operations on item entries, showing a list display, and some local storage functionality using the DOM Storage interface, which at least allowed my list to stick around between usages. I would like to expand the storage capabilities, perhaps with an export/import option for making the item list more portable. I’m even considering something that would integrate a pastebin or gist as a storage backend, I think that would be cool.

In addition to functional changes, I was also able to hack up a simple brand logo image in Inkscape and saved it as a scalable vector graphics(SVG) file. After I trimmed out some of the kruft, this file was embeddable as an image inside my HTML.

This style of application building is an interesting approach to explore. There are surely several more hurdles I will need to clear before I could build really rich applications in this style, but I’m intrigued. Also, many kudos to all the folks who worked on the projects that made this so easy to setup and run.

If you are thinking about trying something like this or just want to play around in the sandbox, here are some links I highly recommend:

And lastly, here is a link to Chicken Scratch so you can checkout where I ended up after a day of hacking, and hopefully where I will go.

To bring this back around full circle, to Stephanie’s message that got me thinking about doing these things in the first place. I do not think these side projects and explorations are essential to advancing in the software industry. I definitely do not think we should be using them as a measuring stick for who the top talent will be. It’s hard not to acknowledge the work that those of us whose hobby computing overlaps with professional computing have done, but I certainly hope it doesn’t color the industry for the worse. I believe that computers and the technological revolution of which they are a part can be a huge boon to humanity. It can provide a means out of poverty for many and also be a tremendous source of joy. I wish Stephanie luck in the quest for normalization in the software engineering world, I know I’ll do my best to treat colleagues fairly and honestly regardless of their off-hour activities.